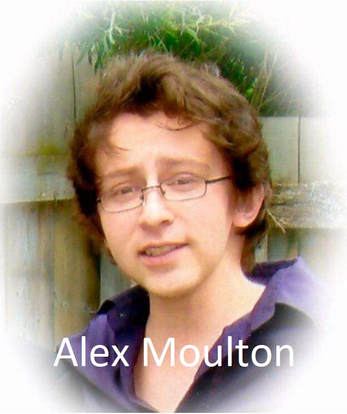 After a courageous battle with cancer, Alex Moulton, died in his mother's arms on February 23, 2010, at the age of 25. Alex was a young man who loved people and who would always find something nice to say to the people he met. He made a big impact in the lives of others.

After graduating from Algonquin College, Alex continued to pursue his education at the University of Ottawa. While in his third year, he was so weak from the chemo treatments that he walked across the campus with a cane and often fell. Alex was so determined to complete his education, he only stopped attending classes on his doctor's orders.

After that, Alex spent a lot of time at home with his mom, brother, his beagle "Smoochie", and other friends. Things were looking up until overnight he became paralyzed from his waist down. On February 9th, he went to the hospital not knowing that it would be his last trip.

A miracle happened! For a long time, family and friends prayed for Alex's physical healing but also for his soul. When he was 22 years old, he was baptized in Jesus name for the remission of his sins. One hour before he drew his last breath, Alex surrendered to Jesus and was filled with the gift of the Holy Ghost and spoke with other tongues. He was at peace and could say, "It is well with my soul."

Alex's story is inspiring because it tells us never to give up. It inspires us to press forward in learning, working, hoping, and praying. This scholarship fund is designed to spread that hope overseas to other young men in memory of Alex.

As Nelson Mandela said, "Education is the most powerful weapon which you can use to change the world."

Hope for Orphans-Congo has been established since 2011. Now seven years later, we are happy to say that four of the children have graduated from high school. We are proud that these four all passed the national test for graduation.

The vision of the charity is to allow these young people to pursue higher education with the foal of being empowered to be productive citizens that give back to their community.

If you would like to donate to this scholarship in memory of Alex Moulton, please click on the icon below:

Please note that all messages to Ruth Moulton will be received by her.

Pictured below are the four boys who will be able to pursue post-secondary education because of this scholarship fund.
Donate to the Alex Moulton Scholarship Fund